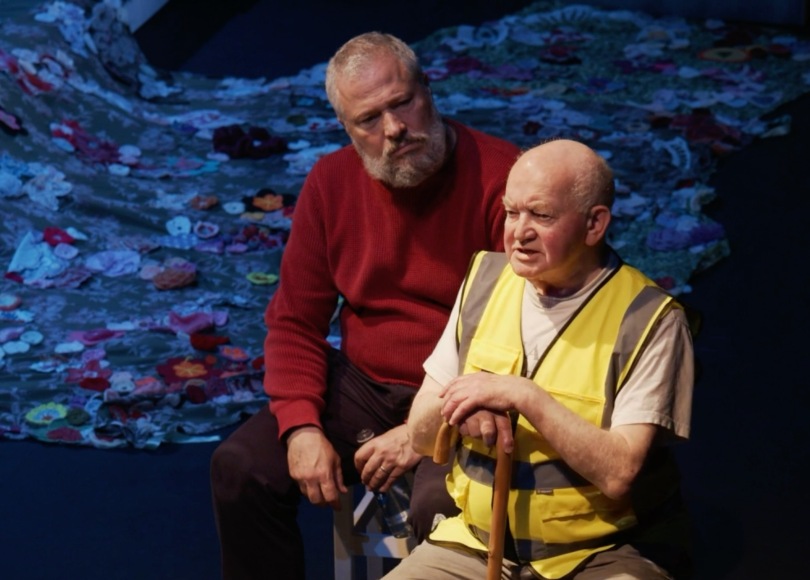 In the new episode of ‘A Culture of Possibility’, Arlene and I spoke with two old friends, David Slater and Alan Lyddiard. Their work is beautiful, in process as much as performance, and I’ve learned a lot from working with them over the years, in different ways and at different times.

Here’s Arlene’s introduction to the conversation, which is available from midday. You can find it and all episodes at iTunes along with miaaw.net’s other podcasts by Owen Kelly, Sophie Hope, and many guests, focusing on cultural democracy and related topics. You can also listen on Soundcloud and find links to accompany the podcasts.

I feel a little silly saying this, but it wasn’t until François and I started talking about our interview with two accomplished makers of theater with older performers—David Slater (founder and now associate member of Entelechy Arts in South London) and Alan Lyddiard (Artistic Director of The Performance Ensemble in Leeds)—that I began to consider the ways my age shapes my art. I think about aging all the time; every little kvetch, wrinkle, and memory-lapse reminds me, as does the vast database of memories I carry. But until now, I think I’ve put art and aging into a category labeled “somewhere out there.”

No more. Let me introduce you to our guests. They started with the stories of their finding their paths into the work, but don’t imagine this was a conversation about nostalgia, because a lot of what Alan and David shared is new as now.

David Slater explained that he graduated from his course in theater wanting to be next director of the National Theatre, but then he directed a Christmas Play by John Arden, The Business of Good Government, performed in a tiny village in Devon in the Southwest of England. He expected the performance to start at 7:30, but “the villagers, most of them were in their 60s, 70s, and 80s. And they said, ‘No, you have to start at six o’clock, because we’ll go to bed at eight o’clock.’ Before we could start the play, there were sandwiches and cakes and tea, and just this amazing hospitality. And so right from the get-go, I learned about needing to dovetail into the fabric of people’s ordinary, everyday lives, and the importance of hospitality to everything.

“To cut a long story short, I’ve had the privilege of making theatre with people for over 45 years in two communities side by side, just south of the river Thames in South London. So my work has really been a continuous practice about relationship. What would happen if you grew older with a theater at the end of your street, with an art space at the end of your street? What could be possible? And how could that help create some kind of ecology with people of all ages?”

Entelechy Arts was cofounded with an Area Health Authority in the early 1980s. Large, long-stay asylums were being closed down, “huge buildings where people who didn’t fit into society were banished, exiled.” Social policy changed to enable people to return into community, “and this particular health authority had the vision of asking artists to go on that journey, helping to discover or uncover or recreate community.”

Alan Lyddiard also started by studying theater at school. “When I left school, I wrote to every regional theater in the country to see if I could get a job. Two replied, Harrogate in Yorkshire and Bournemouth in the south. So I chose Harrogate. And I went to Harrogate as what they called a student ASM [I forgot to ask, but I’m guessing that’s an Assistant Stage Manager], 25 shillings a week, doing everything. Mostly making cups of tea for people, but I loved it, it was just wonderful.”

After directing various companies, Alan got a job at Dundee Repertory Theatre in Scotland, where a very conventional repertoire was performed, having nothing much to do with the people of Dundee. This inspired him to go “out into Dundee and talk to people. I started to get to know people. And I started to understand more about those people, more about what they wanted to see in their theater. And that’s what we started to put on. So slowly, slowly, slowly, this theater in Dundee in the 1970s became not a theater for the middle class, but a theater for the people. It did plays by Dundonians for Dundonians with Dundonians in it. It was an incredible learning curve for me. I met some of the most beautiful people in the world doing that work. And it stuck with me forever.”

Fast forward through years of Alan making theater in Glasgow, of encountering incredible international theater artists from Peter Brook to Yukio Ninagawa to Pina Bausch, of taking that inspiration to Northern Stage in Newcastle, making theater with communities until he tried retirement. “But after a month, I was bored. I thought I’ve got to do something. I started thinking about the great artists that I remembered that people like Ninagawa, like Pina Bausch. What inspired me about them was the sense of company and and the work that they were doing with older people. So I started to form this company called the Performance  Ensemble, which is basically where I’m at now. It’s an ensemble company of about 20 older people creating work. The work always starts from them. And we tell stories about what it is to be old. But it’s not reminiscence, it’s not looking back, it’s becoming a kind of contemporary company of old, gritty performers making work about themselves.”

The differences between starting out in community-based theater now and then were evident. David said “I started work in South London by being given a warehouse on the banks of the River Thames, with a beautiful Canadian sprung dance floor. And five years of ‘there you are, do something with the community.’ So we just open the doors and see who wandered in.

“Some of the people that wandered in were older women in their 80s and early 90s, people who’d been born in the late 1890s. These women had survived everything that the 20th century had thrown: two world wars, the depression, they’d lived in such just such hugely challenging circumstances and they’d come up flourishing. They survived on song, on stories and on dance. I was in my mid-20s, this raw young theater maker, and I just apprenticed myself to them. If you were within their company for about 15 minutes, it was like being in an opera. They had a song for every conceivable human emotion, they couldn’t literally get through 15 minutes as a group without bursting into song.”

Alan shared his epiphany seeing a production in 1990 based on the lives of homeless men in a hostel. “It came to life for me with these men in their in their 50s, 60s, and 70s, mostly alcoholic, mostly in recovery, trying to be in recovery, living in a hostel in Edinburgh, but telling stories and singing songs, and doing Shakespeare in a way that I’ve never heard before. I remember one of them, particularly during the speech in Richard II, ‘let us sit upon the ground, and tell sad stories of the death of kings,’ spoken by this alcoholic homeless man. It was the most powerful rendition of that Shakespearean text that I’ve ever heard. It made me think there’s something else going on here, the people have got more to say, and more to express than these people in these theaters across the other side of this of the country. And we need to be looking after them and we need to be working with them.”

Listen to the episode to learn about Theatre of Wandering, David’s new piece for Coventry, designated the U.K.’s “City of Culture.” Created in collaboration with Theatre Company OiBokkeShi based in Okayama, Japan. “It was a version of a performance that I’d seen in Tokyo about three years ago, the story of an older man who is wandering through the streets of a city, looking for his wife, who’s living with dementia. And the audience journey with this man. They go into shops, into front rooms, they literally wander through the fabric of the city. So this was a really huge opportunity to recreate to reimagine this story with citizens of Coventry on the streets of the city.” It’s an amazing project to hear about. You can also read more about it here.

You’ll also hear Alan talk about a recent Performance Ensemble production, The Promise of a Garden. (See some photos and read a bit about François’ experience of the production here.) “I make theater of images,” Alan explained. I love to make beautiful images, and so that’s the crucial thing for me that it should look beautiful. It starts on an empty white space with this enormous black guy dancing. And it’s so beautiful, so beautiful. And then a flower will emerge, and another one, and another will emerge and then hundreds of flowers will come in. And then there’ll be place where somebody can sit out there in the sunshine and tell a story about their amazing backyard that became a garden. It’s involving dance, and it’s involving music, and it’s involving text. And it’s involving imagery. That’s the key to it. It’s lots of things.”

One thing that stood out for François is the way all of these works are grounded in the particular and connect to the universal. “The pieces that Alan and David have described are very different. But they start from real experience, lived experience, but crucially, they’re turned into art. So when, in The Promise of a Garden you have stories of all kinds of people, people who’ve grown up in Hong Kong and have moved to to the U.K., people whose life experiences have taken them from being a priest to being a gardener, on one level you would think, what does that have to do with me? How do I connect with that? But it’s that process of art-making that finds ways into that, that finds the profoundly human element at the heart of it.”

We loved having this conversation and I have a hunch you will love listening.

Charles Wilson, “Getting Old, The Alternative.”