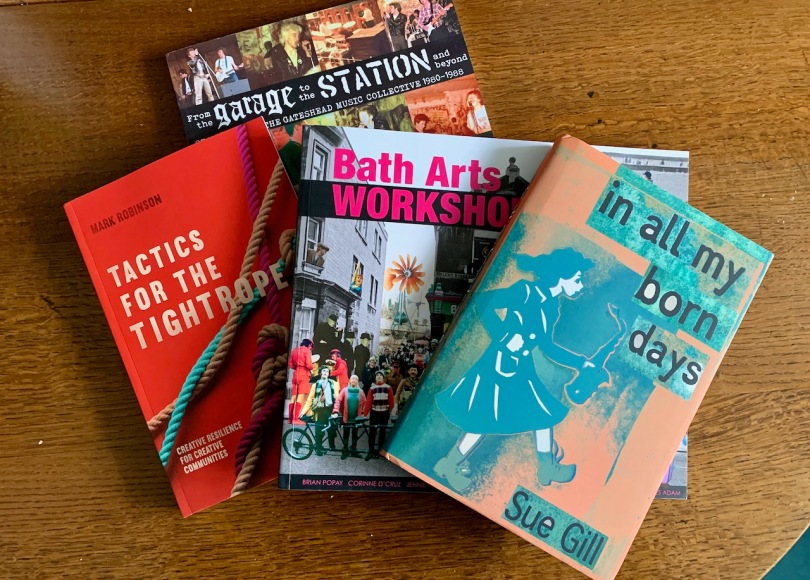 Over past year or two, I’ve had a series of conversations with people about books they’ve been working on. Some have been long, collective processes, others more individual, but all, I think, will interest readers of this blog in one way or another. Several of these projects have now come to fruition, and it’s a delight to see the published versions.

Three of the books are concerned with histories of community art, which means, among other things, social history, because the two are always intertwined. That’s part of what has always made community art so fascinating, both as practice and story (thinking about art outside its social context has little appeal for me.) The fourth is of this time and the next, intended to help people working in the arts to navigate choppy and changeable seas without losing their direction. But, after all, perhaps that’s what history is for too. Alongside its intrinsic interest, it’s a filter through which to reflect on our own times and lives and choices.

There are some intriguing connections, in these parallel worlds, bound together by a shared faith in art as a route for social justice, human flourishing and more sustainable, peaceful societies in a kinder world. It’s a belief I share, of course, which is why the books speak to me, but beliefs needs nurturing through practice, exchange and community. Sometimes, now for instance, they need active defence, and each of these books is an effort to do just that.

This book, for me, began in a phone call from Nigel Leach, nearly three years ago, and an invitation to come and speak at an exhibition about this pioneer community art project. The show was held at the Museum of Bath at Work (a building saved by the activists of BAW), and was the first opportunity to look back at this work after several decades. I have warm memories of meeting the people behind the project at the exhibition seminar in lost pre-pandemic days. Two years on, a book has just been published. It’s a rich. oral history with the voices of key members and many other people who contributed to, enjoyed and remember Bath Arts Workshop. It’s big, too, full of photos, posters and drawings, telling an important story, not just about Bath but the history of those times when so much of our present culture was reimagined. And the progressive spirit that animated the workshop continues:

We challenge the assumption that 60s ideals were naïve and unworkable, or an adolescent failure to grow up and take responsibility. We believe that the countercultural expressions of the time amounted to more than just hedonism, lax moral codes and bad fashion! To different degrees we shared a vision of a world in which compassion and generosity came first, along with faith in human creative potential, concern and respect for the environment, and an underlying critique of the class-ridden, consumerist and militaristic culture that prevailed.

From The Garage to The Station and beyond

Stories from the Gateshead Music Collective 1980-1988

Another oral history, this time from about 50 people who were involved with Gateshead Music Collective in the 1980s. The DIY music explosion that included (but wasn’t limited to) punk was another expression of the cultural democracy advocated by the community arts movement. Suddenly, it was possible not just to start a band, but to start a record label and take on the establishment directly. Community printshop, (including the one in Deptford where I was learning my profession) were allies, helping produce posters, flyers and badges in days when fly-posting was still a standard way of sharing alternative ideas. I first heard about this project from Esther Salamon, who worked with the collective at the time. I love how the authors stay true to the ethos of the collective, in how they tell the story, in the book’s design and in self-publishing the project. DIY rocks…

We’re all here for such a short time, and appear to have no real power beyond our imaginations, yet perhaps the ability to imagine who we really are and what we really want to create, is our greatest strength. Certainly the next generation needs to know what the last generation accomplished, how they did it, and why.

Desmond in ‘From The Station to The Garage and Beyond’

In All My Born Days

This memoir is the most personal of the books here, but as Sue Gill was one of the founders of Welfare State International it is also a story of community. The personal is political, and Sue’s life shows both the truth of that idea and the richness that can come from embracing it. ‘In all my born days’ weaves together art, environmental politics, family tales, theatre stories, folk legends, childhood, poetry and much more, all enlivened by husband John’s woodcuts and daughter Hannah’s lovely dust jacket. And it’s beautifully written. A less gifted writer, or one with less resonant ideas to share, might not succeed in making this approach work. But Sue was a cornerstone of perhaps the most influential art group in the last third of England’s 20th century, and it’s a delight to be in her company as she threads key events in that story through moments of family life. It’s hard to pick just one example, but here’s a taste (pun intended):

Food, security and love. Our appetite for all three gets entwined and the comfort of a shared meal – however simple – embraces all these needs for nourishment. […]

Once we were in Liverpool at a Youth Club, working on an outdoor autumn celebration. Live music, processions, bonfire, sculptures and food to round it off. As the cook I decided to make something seasonal. A large cauldron of ruby red soup to warm everybody up. chose Russian Borscht: carrots, potatoes, onions, shredded red cabbage, tinned tomatoes and loads of fresh beetroot.

There I was, ladle in hand, ready to serve it out into mugs, topped authentically with a swirl of soured cream, to the line up of hungry lads. The first few youths took theirs, had one look and scowled.

What the f***’s this?!!!!! and chucked it onto the ground and back at me, hot soup flying through the air. Apron over my head, I beat a retreat while they cleared off to the chippy, kicking over some newly planted saplings as they went. Ah well, that’ll teach me…

Tactics for the Tightrope, Creative Resilience for Creative Communities

The last book in this little collection is both more theoretical and more practical. Mark Robinson is a poet, musician and consultant who draws on all his creative skills in a handbook for people running arts businesses in difficult times. It’s not exactly a response to the pandemic – Mark knows that many of the problems faced by an over-extended, under-capitalised sector were evident before the crisis – but it does take account of the additional pressures it has produced. That alone makes it an important read, as so much that was taken for granted 18 months ago (however mistakenly) is no longer tenable. I haven’t run an arts organisation for nearly 30 years, partly because of today’s management culture, and I admit that some of the ideas and tools here stretch my understanding. But even those I will never apply are interesting to read about, and there’s invaluable guidance here for anyone trying to meet the complicated, sometimes contradictory expectations of stakeholders while keeping faith with their own core purpose. And that is value of Mark’s book, as he explains towards the end:

The development of business models, assets and networks that enable to “be robust about what we stand for and what our values are” boosts the potential to resist against the forces that damage and limit our creative communities. It is in keeping with a long history of self-organisation such as trade unions, co-operatives, credit unions and other coping mechanisms. That a way of thinking helps you cope with the outcomes of neoliberalism does not necessarily mean you cannot also use it to continue to work to resist that marketisation in the long term. In culture, we have great opportunities to do this by the way our work can simultaneously add to ‘the commons’ across so many areas., even as we may be forced to compete within markets for audiences, funding, commissions or attention. I would argue we need to build our creative resilience in the context of this cultural ‘commoning’ through greater sharing of spaces, resources and skills; more collaborative working and consortium working – as seen in different ways across so many programmes, and in freelancers’ responses to Covid lockdowns. Together perhaps, we can if not totally avoid competition some is arguably inherent, even if it is for attention as an artist – but make it fairer and less distorting.

These are not easy positions to take, or simple to deliver.

Mark Robinson, Tactics for the Tightrope