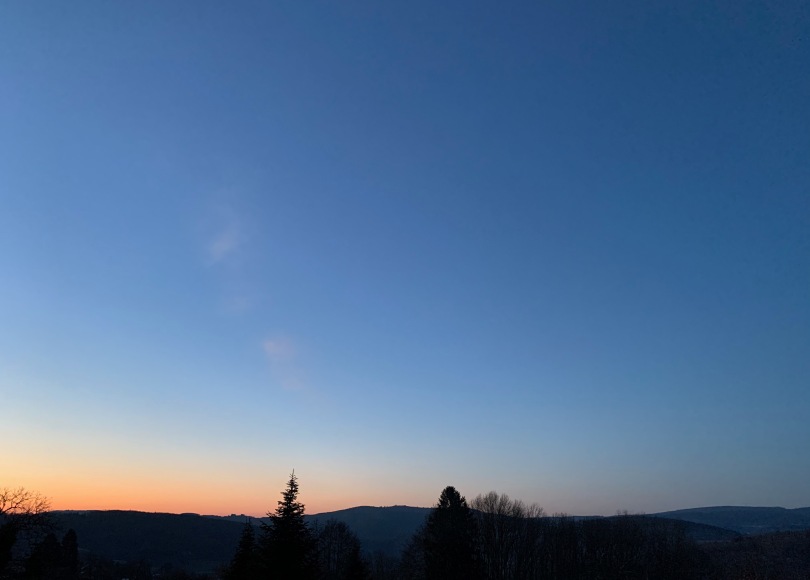 I feel a stranger to all surprises

You can have them I don’t want them

I wear a different kind of garment

In my rehearsals for retirement

The mornings are getting lighter; the days noticeably longer. It’s 7.5 below zero, and the frozen gravel cracks underfoot, but there is at least the promise that spring is gathering its strength. Nothing is more reliable than nature, and that matters in a time like this. The starlings, robins, tits and blackcaps I’ve been feeding through the winter will mostly make it. The hedge needs laying before they think of nesting there.

In three weeks’ time, the pandemic will have kept me here, alone, for a year. A couple of weeks after that, it will be the anniversary of the first lockdown. In that year, I’ve made two short trips, to England and Portugal, in the brief false dawns of summer and early autumn. Otherwise, my world has been limited to this village, and occasional trips to our closest town where the supermarkets are open. Since the café had to close in October, my social contacts have shrunk to the light duties of a local councillor, and a weekly aperitif with friends. We’re not in lockdown, but with so many places closed and a 6pm curfew, there’s not much reason to go out. At least the schools and colleges are open, including the local primary: the young, least suited to cope with this situation, and most likely to suffer long-term effects, have some semblance of a normal life.

Ah, but Zoom! That digital lifeline has rescued my working life choked by the virus. There are days when I spend five or six hours online. The absence of those meetings is how I tell weekends from weekdays. Self-employment blurs lines between work and life, especially if, as for most artists and writers, the days’ satisfactions come through creativity. Getting paid affects my obligations, not my purpose. Still, with family and friends out of reach, other parts of my life have shrunk like a vacuum-packed duvet. As time has passed, and the prospect of release has stalled and faded, this has become a rehearsal for retirement. Already, because I’m in my sixties, more and more of my friends are retired. The government has written to tell me what pension it plans to give me. In rural France, millions live alone, as I’ve been doing, beached by time and a world more interested in what people do than who they are.

A few years ago, I wrote a book about people practicing art in old age, based on meetings with retired people. In Winter Fires I wrote about ageing’s losses – of companions, occupations, money, strength, health and dignity – but argued that the capacity to create art, and therefore to retain some agency in the world, can be retained to the last. And during lockdown, many people have drawn on their own creativity, to entertain and accompany them, certainly, but also so that they can be the subjects of their own stories, not simply the objects of the pandemic’s. It was a hopeful idea, because I’ve always believed that hope is the better resource with which to work. My work can be criticised for that, but hope is what encourages human beings to improve their situation. Otherwise, as the Dalai Lama says, you might as well sit on the beach with a beer and dream the time away.

This past year I’ve lived in that world of losses, like everyone I know. Some have been deep and irrecoverable. Some have been grim but perhaps less final: fitness, work, careers and prospects, homes, financial security and plans for the future. Most of us have lost our bearings in this upturned world. It’s no longer possible to anticipate the future with any confidence, though in truth that’s always been unwise. Now, as vaccine numbers rise and politicians begin to talk cautiously about a time when we will live with Covid-19, I wonder which changes will permanent.

I’d be foolish not to recognise that I’m on the threshold of – what? It’s taboo in this doing world to speak of diminishing powers, almost more than of death. And yet I’ve accepted for several years that my working life is changing, and with it, my priorities and contribution. But this year has helped me see that there still is a contribution, even if it is only through a computer screen. I’ve been working on more community art projects than for a long time, often in new and unexpected roles. I’ve been talking to lots of younger artists, helping them think through their ideas and projects. I’ve been re-thinking some of my ideas about the social role of participatory art, and finding better ways to articulate its importance. And I’ve been learning to write more directly and personally. I remember what one of the people I met for Winter Fires told me:

‘Once I turned 50, I didn’t care what anybody thought of me. Take me as I am. I might put my foot in it now and then, say the wrong thing or curse, but that’s me. I’m certainly not going to change now, so why worry about what people think?’‘

Whatever comes next, I hope this rehearsal has helped me learn how to make the best of it.