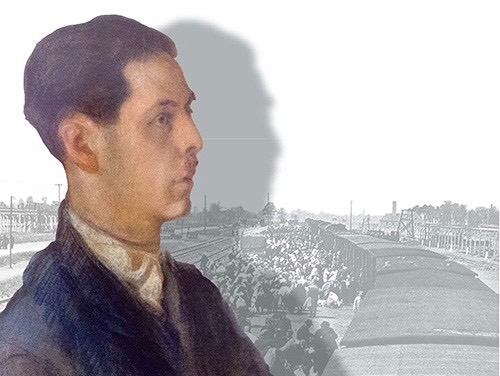 My father and grandfather survived the Shoah, thanks to the Greek resistance.  My grandmother survived because she was Christian. Millions, including others in my family, were not so lucky. Of Thessaloniki’s Jewish inhabitants, fewer than one in twenty were alive when the Germans left in October 1944. People came out of hiding and down from the mountains. Later, a few came back from the camps. My grandfather, who was a doctor, wrote about what had happened, first in newspaper articles and then in a slim book, published in 1948. He wrote as a scientist, using documents and first hand reports. He told a collective story, not an individual one: of his own experiences he said nothing. Though French was his mother tongue, he published in Greek, so that his fellow-citizens could learn what had been done to their neighbours. Then, he returned to his occupation of treating the sick, because life is a sacred gift.

Seventy years later, his text has been republished in a scholarly edition with new material and a biographical introduction. This week, I spoke at an event in Athens to mark the publication. What happened during the Second World War had profound consequences for my family, as it did for millions of other people. It shaped my life and my work. But I saw it as history. I did not expect it to be forgotten, questioned or denied.

I wish it was not necessary to republish my grandfather’s report, that it could remain a source for historians. I wish I didn’t have to talk about it. But evil starts with lies. I know what happened to my family when the Nazis were in power. And the truth matters, as it did in 1948. I do not have my grandfather’s courage but I will not fail his example.