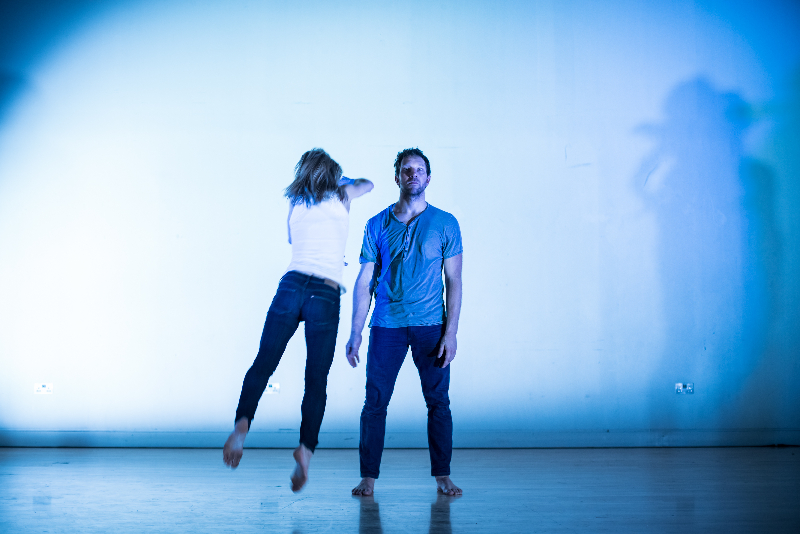 It’s been said that writing about music is like dancing about architecture. I’ve never been convinced. Human beings are not locked into silos. They are not fixed in place like trees.  Translating experiences from one form or language or culture to another is an everyday necessity. Like all translation, it’s creative. It brings into being something new. And being creative, it leaves the source untouched, just continuing its adaptation to a changing reality.

The phrase came to me as I watched a film of Joli Vyann’s performance, Stateless. I met Jan Patzke and Olivia Quayle a few days ago after seeing them perform a different piece in Norfolk. Their mix of dance, acrobatics and theatre is breathtaking but never intimidating, perhaps because they communicate so well with the audience. The piece I’d seen was about the strength and frailty of relationships. By turns witty and moving, it was perfectly suited to the physicality of their performance language. Stateless was an altogether different work, addressing migration and the experience of refugees. As they told Theatrefullstop:

‘We were very interested to make a political piece. We feel that the subject of immigration is often spoken about broadly along with all the problems associated with it and we wanted to delve into the subject on a more personal and human level. […] This led us into more research about the individual people, their stories and their physical and emotional journeys.’

Communication technology has made us spectators of suffering. If the political challenges of globalisation are hard, the moral ones seem worse. What do you do after watching the news? People make different choices, for different reasons. These artists chose to make a dance piece about it. They talked to Counterpoint Arts, who put them in touch with migrants and refugees now living in London. They read (including Bread & Salt, which was how we came to meet). They began to explore how to translate those stories, experiences and feelings into the language of their art. Stateless, an hour long performance whose soundtrack includes the voices of some of the people they met, was the result.

What will it change? I have no idea. Art doesn’t work like that. It isn’t a political programme – we have politics for that. Audiences will be affected but who knows how? To bear witness is a moral position though, not turning away even when you have no help to give, no answers to bring. Artists can help us look at what we usually turn away from, and see it differently.

Dancing about migration? Why not…