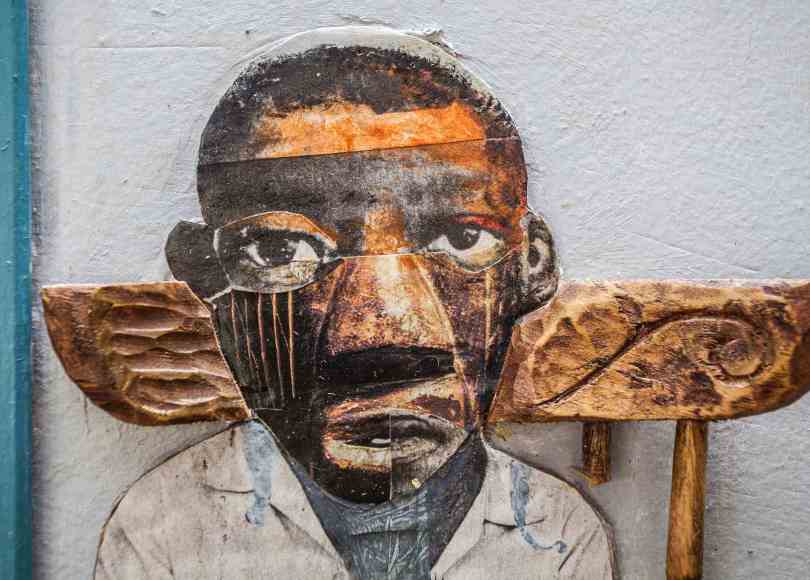 Last night was the opening of Bill Ming’s exhibition at New Art Exchange in Nottingham, his first substantial solo show in Britain for almost 10 years, though his work has been celebrated in his native Bermuda. I’ve known Bill since 1982, and worked with him on several occasions, most recently on Bread and Salt, Stories of Art and Migration, for the Regular Marvels series.

I believe him to be one of the finest artists I’ve met but, over the decades, I’ve also observed the art world’s indifference to his work.

It’s true that it has qualities that are not much valued in contemporary art today. It’s approachable, visually rich, has figurative and narrative elements, and can be humorous. But those are not unforgiveable sins:  some of the YBAs can get away with them. The real problem, I think, is that some of Bill’s work includes woodcarving. Last night someone said to me:

‘I wasn’t expecting much, but I was blown away. I hadn’t seen much of his work but I thought it was just a kind of African woodcarving.’

The speaker is a thoughtful and knowledgeable person who’s known of Bill’s work for years. He’s also, for various reasons, sympathetic to non-mainstream artists. But he still came expecting to see ‘African woodcarving’.

The first problem is allowing surface appearance to prevent us from seeing beyond it, to the work’s nature, purpose and meanings. And yet what is contemporary art about if not inviting—challenging—us to look beyond the obvious?

The second is the implicit association of the diverse artistic practices of an entire continent with ideas like ‘craft’, ‘folk’ or even—under your breath—‘primitive’. I know nothing about the traditions and culture of woodcarving in Africa, but I know that it cannot be a single thing any more than ‘European music’ is one thing.

The British art world has often seen Bill Ming’s work as a cliché. A black man carving wooden figures—how interesting can that be? But the real cliché is in that thought, not in the work it condemns. It is prejudice masquerading as artistic critique. In a famous passage from James Boswell’s Life of Dr Johnson, the author reports his mentor’s reaction to the idea of a woman above her station:

I told him I had been that morning at a meeting of the people called Quakers, where I had heard a woman preach. Johnson: ‘Sir, a woman’s preaching is like a dog’s walking on his hind legs. It is not done well; but you are surprised to find it done at all.’

(To get the full pomposity of that remark, you have to hear it in the voice of Robbie Coltrane, playing Dr Johnson in Blackadder the Third.)

The western art world too often behaves like Dr Johnson, complacently unable to recognise a challenge to its authority. But such challenges do not go away when they are ignored. Closing your eyes makes the bogeymen appear, because they’re your bogeymen. Bill Ming’s work has already done more to change how people think and see that that of many more celebrated artists. I think it will outlast much of what’s admired today as well.

Bomb in a Baby Carriage

Wit Dese Hands by Bill Ming, including the artist’s reflections on his life and work, over 70 colour photographs and a piece by Andy McKay as well as this essay  (PDF file 55MB download).

Against the Tide: text and images of this essay (PDF 250kb download)